Before OutWiker 1.8 had used HTML generating approach (for wiki and HTML pages) which two going one after another the line breaks had meaned begin of the paragraph. The paragraphs had covered with <p>...</p> tags. The single line break had replaced by <br> tag. While this approach had used for user, which not sees HTML code, it was not obvious what indention between paragraphs will be getting after adding several line breaks one after another. Therefore since OutWiker 1.8 the approach changed, and all line breaks are replaced by <br>.

However for others users, which use OutWiker for creation of the HTML pages, old approach (with <p>...</p> tags) had do more, since old approach had more satisfied HTML standard. Therefore in OutWiker 1.9 added the possibility of the adding approaches of the HTML generation by plug-ins.

HtmlFormatter plug-in add a "new" approach for HTML generation which resembles approach before OutWiker 1.8. The approach is more careful in terms of HTML standard.

There is showed HTML code generated by two approaches.

After installing the plug-in in preferences dialog (called by "Edit - Preferences..." menu item) in the "Preview" section will be showed "Paragraph separator" option up. This option will be selected value "Line breaks (<br/>)" (the default value). This value can change to "Paragraphs (<p>...</p>)" 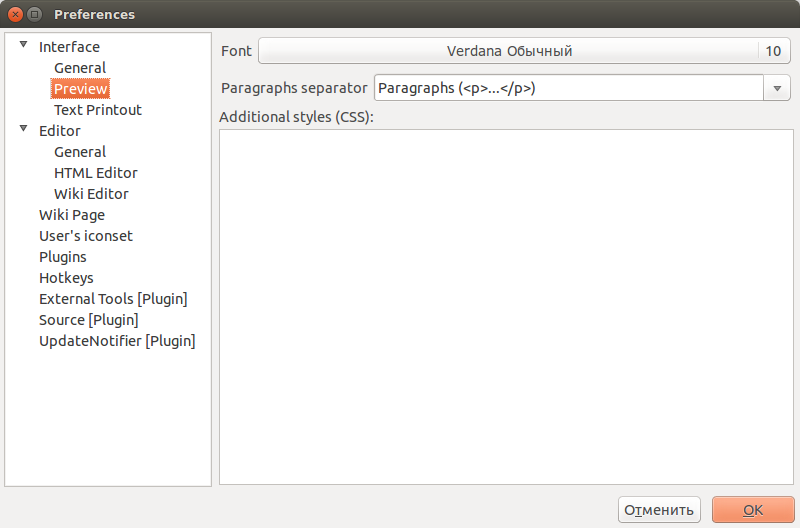 After that the paragraphs will be covered by <p>...</p> tags.